What is rapid palatal expansion?

Stretching with the distractor is usually done with an expansion screw, which the patient can open step by step to stimulate transversal distraction of the upper jaw. According to the instructions of the treating physician, the patient turns the screw slightly 1-3 times a day. The success of the treatment is regularly checked by the doctor.

The resulting stretching stimulates bone growth in the area of the bone suture in the middle of the palate (“palatal suture”) which leads to a transversal bony expansion of the upper jaw.

With children and adolescents, very positive experiences have been made with conventional palatal expansion in particular. The middle suture of the upper jaw is a natural growth plate. No additional surgery is required to expand the upper jaw, since the palate is not yet fully ossified. In children and adolescents, bone growth can thus be stimulated by pressure or stretching in the desired direction.

In adults, ossification is already complete in any case. Therefore, before the maxillary expansion, a palatal expansion surgery for adults is necessary, in which small incisions are made in the upper jaw in order to intentionally weaken it and thus enable the expansion of the upper jaw. This procedure is also called surgically assisted rapid palatal expansion (SARPE).

Due to the constant pressure of the appliance, the upper jaw can thus be expanded by approx. 5 mm in one month.

When does the palatal suture ossify?

As soon as the sutura palatina mediana has ossified, the conventional method of palatal expansion is no longer sufficient. According to the literature, the time of complete ossification sets in from around the age of 15 to 16.

When do you need a rapid palatal expansion?

In orthodontics, palatal expansion is used in cases of a so-called upper jaw crowding. In this case, the patient’s upper jaw is particularly narrow.

The consequences of a narrow jaw can include the following:

There are actually no useful alternatives for palatal expansion. In children and adolescents, depending on the characteristics of the narrow jaw, loose braces can also be used.

This treatment is called slow palatal expansion and is a procedure to expand the maxillary arch in transverse dimension to correct the constricted maxillary arch with light forces.

However, the advantages of a GNE predominate with a significantly shorter treatment period and the minor impairment while speaking.

In rapid palatal expansion, the duration of the procedure varies from patient to patient. The procedure is performed under general anesthesia and lasts approximately 30 minutes. The expansion phase, during which the upper jaw is expanded, typically lasts a few weeks. After that, the distractor remains in the jaw for a few months to support it. This can vary between 6 and 9 months.

What comes after palatal expansion?

For how long will I be off sick after rapid palatal expansion?

The palatal expansion surgery recovery usually takes 2 weeks. Depending on the patient, the recovery period can sometimes be longer.

Why is orthodontic treatment necessary when treating children?

Rapid palatal expansion is typically used for upper jaw crowding. The crowding can result in a whole range of other consequences. Resulting tooth misalignments make dental and oral hygiene much more difficult. This leads to a higher risk of tooth decay and periodontitis, as well as damage to teeth in general, including tooth loss.

Jaw crowding is often accompanied by a narrowing of the upper airway, which can impede nasal breathing. This, in turn, can lead to snoring and obstructive sleep apnea.

As described, palatal expansion in children does not require surgical intervention and is therefore less invasive.

Are there age limits for RPE treatment?

What does a rapid palatal expansion cost?

The cost of a RPE depends on several factors such as the size of the defect or the planned therapy.

A rough guide for children is 500-1000€. For adults, who also require surgery, the cost is around 5000€. It should also be noted that children and teenagers can usually expect their costs to be covered by their health insurance.

For adults, however, orthodontic treatments are usually purely private services.

In a before-and-after comparison after successful rapid palatal expansion, changes in the face can usually be seen, as the proportions change.

With conventional treatment methods, asymmetrical distraction often occurs due to symmetrical mobilization. This can not only be visually very annoying, but also usually results in further orthodontic treatment such as braces.

Under the approach of personalized medicine, Simq together with KLS Martin has developed a medical software that guarantees symmetrical distraction. Medical simulation with the Simq RPE preoperative planning software can also be used to specifically optimize the surgical incision. In addition, due to the often shorter incisions during surgery and the blood vessels that remain as a result, the trauma to the patient is lower with this surgical approach.

The experience with palatal expansion for adults using this method has been very positive, both on the part of the patients and the treating physicians.

An aneurysm is a balloon-like bulge in the wall of a blood vessel, usually in arteries. Aneurysms develop at 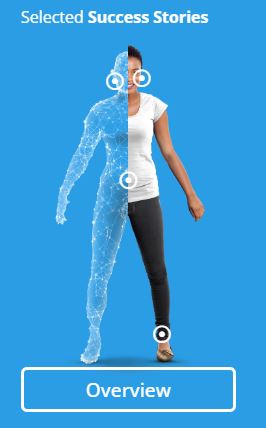